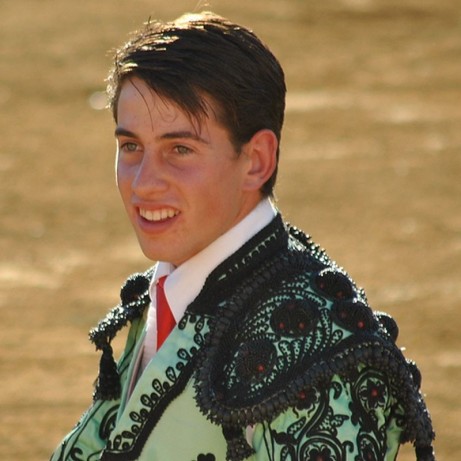 Debuted in public: On July 18th, 2011 in Castellon town of Vinaroz, hand in hand with another young candidate, Jose Angel Fuentes.

Debuted with picadors: On May 10th, 2014 in a poster completed by Alvaro Casillas and Javier Montalvo with steers Castillejo de Huebra.

Debuted in Las Ventas: The day July 19th, 2015 in a poster completed by Alvaro Casillas and Javier Montalvo with steers Castillejo de Huebra.

His father, Joseph Conquero, known by the nickname Hurricane Huelva, wanted to be a bullfighter and he inherited his bullfighting vocation and received his first advice, since he has not belonged to any school of bullfighting.

He stepped spaces little responsibility, but where a young bull seriously and rennet bull, which served to acquire office of face such important commitments as its presentation in Madrid on 19 July last year, is fighting one The Chospes run. It was brilliant presentation but it was a mole in a loaded paseíllos 26 season, and success since cut 34 ears and signed up to ten tasks awarded with the top trophies. Already this year 2016 Huelva has announced five celebrations, which has cut seven ears.