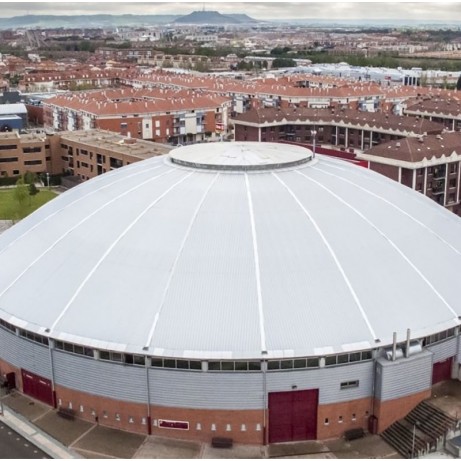 La Flecha Bullring, located in the town of Arroyo de la Encomienda (Valladolid). It is a multifunctional building, covered and heated, which allows the celebration of many kinds of shows throughout the year.

It hosts a charity bullfighting show every year.

*Photographs by town-hall of Arroyo and Tauroemoción

The initial bullring, without cover, was inaugurated on June 10, 2006 with a bullfight from Santiago Domecq for a luxury list: Enrique Ponce, Morante de la Puebla and El Juli. After cutting the inaugural ribbon and making the walk with their ‘monteras’ (bullfighters hat) in hand, Ponce and El Juli triumphed on an exciting afternoon. The bullfighter from Chiva (Valencia) cut an ear to the first bull and another one to the fourth, a reserve bull from the same iron. For his part, El Juli did a two-ear task to the sixth brave, the best bull of the afternoon; both came out on shoulders. Morante had the worst lot and left empty, but he left details in both tasks.

The works to provide it with cover and heat began later, becoming a modern multipurpose space located just eight kilometers from Valladolid. In addition to bullfighting celebrations, the bullring hosts concerts, sporting events or markets.

However, this process involved several headaches for the town hall due to the various difficulties encountered in its construction, by Collosa company. Although the second phase began in 2006, it was paralyzed until 2008 and the initial budget increased by more than 2,000,000 euros.

Initially, the building was going to incorporate only a heating system, but later it was also decided to install air conditioning. In addition, the first designed dome failed to maintain the indoor temperature, so it had to be modified. The total cost was 6,000,000 euros.

In 2018, the adjacent esplanade was paved and inaugurated to expand its use with outdoor activities.