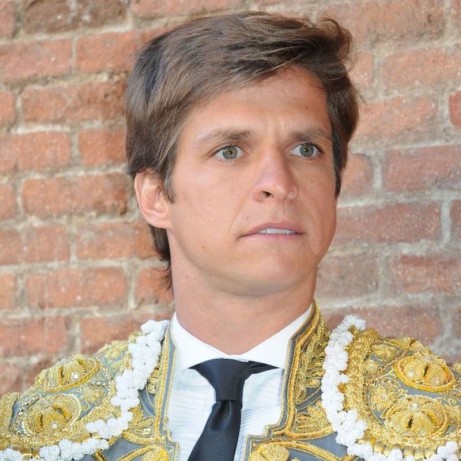 Julián López Escobar was born in Madrid in 1982. Steer bullfighter very early, debuted with picadors in Mexico because of the impossibility of doing so in Spain for his young age. And there begins the story of a figure of bullfighting...

Debut in public: May 20, 1993 in Villamuelas (Toledo), the town of his mother; cutting two ears and the tail to his calf.

Debut in Las Ventas: September 13, 1998, alone with bulls from different ranches; he came out on shoulders.

Confirmation: May 23, 2000 with the bull 'Pitanguito' from Samuel Flores, accompanied by Enrique Ponce and Rivera Ordóñez.

Julian Lopez Escobar, known as El Juli, is descended from a family of bullfighters. His father, known by the same name and nickname, was a novice matador and a “banderillero.”

At the rural celebration marking his First Communion, El Juli the child engages a calf for the first time with the cape. This experience is so exhilarating that he asks his parents to enroll him in the Escuela de Tauromaquia de Madrid (Madrid Bullfighting School).

El Juli was shaped as a bullfighter in Mexico, and with nearly 300 festivities involving calves and steers to his credit, he took the alternativa at age fifteen and eleven months. This made ​​him the youngest ever bullfighter in history.

A matador enjoying strong popular appeal, El Juli was the last great discovery of twentieth century bullfighting. His presence has filled the bullrings thanks to his mastery of every bullfighting pass. During his first years, he participated in hundreds of bullfighting events, which led him to head the ranks of bullfighters in 1999, 2000 and 2002.

Employing new agents in the last several years, Julian Lopez has made fewer appearances in the ring, but has acquired maturity and depth in his bullfighting. Although it is argued by some fans and critics that the purity of his fighting has clashed with commercial ambitions , El Juli’s outstanding achievements in both Spanish and Latin American bullrings have made him a leading figure in bullfighting.

Awarded Concha de Oro winner for being the best bullfighter of the San Sebastian Fair 2019.