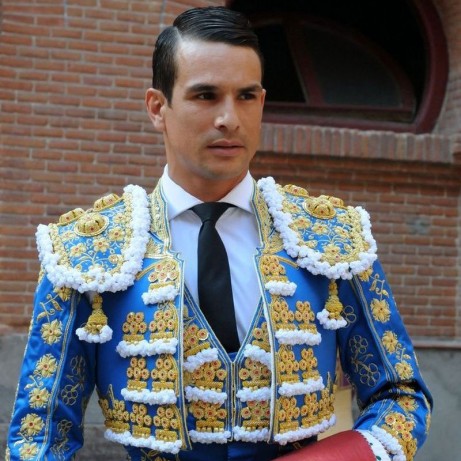 He debuted with picadors: In Nimes (France) on 22-02-2002 on a poster completed by David Luguillano and Juan Bautista with young bulls Victoriano del Río.

Debut Sales: He made his presentation at the bullring of Las Ventas (Madrid) on June 15, 2003 I acartelado with Jose Manuel Prieto and Luis Bolivar with bullocks Los Bayones.

Alternative: In Alicante sharing the stage with Enrique Ponce and "Paquirri" with Daniel Ruiz bulls on June 24, 2003

He confirmed the alternative in Madrid on May 17, 2005 acartelado with Cesar Jimenez and Salvador Vega with bulls Garcigrande.

He acted as godfather Valencian matador Enrique Ponce and witness the Andalusian Francisco Rivera Ordonez. Manzanares cut an ear to his first, two ears and tail to his second, both bulls from the herd Daniel Ruiz.

After sharing the stage with his father seasons 2007 and 2008 have highlighted the high artistic level deep, serious and bullfighter from Alicante. In both, despite leaving before completion (in 2007 by dengue and in 2008 by a virus that caused vomiting in the alley of La Condomina of Murcia), he puts heights of his bullfighting, and got among the winners every year. Particularly important was the 2008 season, in which he won resounding victories in Seville April laFeria, and the Fair Bonfires of Saint John, where he left shoulder in two presentations.

On the afternoon of April 30, 2011 pardoned a bull named "Thrown" Nunez from livestock Cuvillo in the Royal Cavalry of Seville, after 43 years without happen.

Since 2006, it is taken over by the Matilla House (Antonio García Jiménez).

Proclaimed by the company Taurodelta San Isidro 2016 as winner of the show, as best task as best thrust.

The Tauromundo Association gave the trophy to the "Best Season "after his triumph in the last Charity bullfight Held in Madrid;

The Ayuntamiento of the city of Malaga awarded him as a winner of the Traditional Corrida Goyesca held last September.