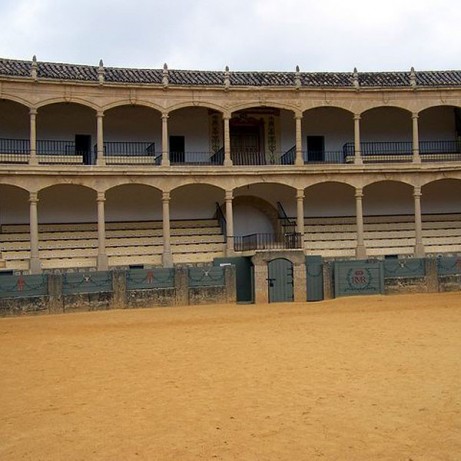 Bullring of Ronda, Málaga. Real Maestranza de Caballería de Ronda, Pedro Romero Fair. All the information about bullfighting, bullfighters and bullring of Ronda. See a Bullfight in the unique setting of Bullring Ronda is a unique, unforgettable experience.

Bullring Real Maestranza de Caballería de Ronda, is recognized as one of the oldest and most monumental in the world. The construction of the plaza lasted six years and was inaugurated in 1785 with a bullfight featuring Pedro Romero and Pepe-Hillo. In Ronda in the Eighteenth century, the Romero family produced three generations of the most unique bullfighters of the time. Among them stood out Pedro Romero. In the Twentieth century, a second dynasty of Ronda bullfighters, the Ordóñez, was another contribution to the history of bullfighting. Its two central figures were Cayetano Ordóñez (1904-1961) and his son, Antonio Ordóñez (1932-1998). It was the Ordonez family, who, in 1954, inaugurated Ronda’s “Goyesque” bullfight to celebrate the bicentennial of Pedro Romero’s birth. Since then it has become one of the most striking events in the bullfighting calendar, as well as being an important social event. The bullfight takes place in early September, coinciding with the most popular of the three fairs held in Ronda, a display of carriages and harnesses, and an equestrian bullfight (corrida de rejones).

Check the official bullfighting schedule to match a bullfight with your visit dates:

Request information and advance tickets booking for all bullfighting events in Ronda: Such is the fondness for this place, that localities will annually renewing with the full payment of fair 3 festivities. Purchase season tickets (3 shows) and single tickets can be more or less complicated. We do recommend you book in advance. You may book in advance and be the first to purchase tickets to any event at the Ronda Bullring. Servitoro delivery service offers the User the opportunity to acquire the tickets in a safe and easy manner from his/her home address, avoiding long queues before ticket offices. Complete the request information about Ronda. Once we have the tickets On sale, we send you a booking confirmation e-mail for make your definitive order.Servitoro offers to non-residents the opportunity to deliver the tickets to hotels, hostels and similar during their stay in Spain and coinciding with the bullfight event (2-4 days before the show).