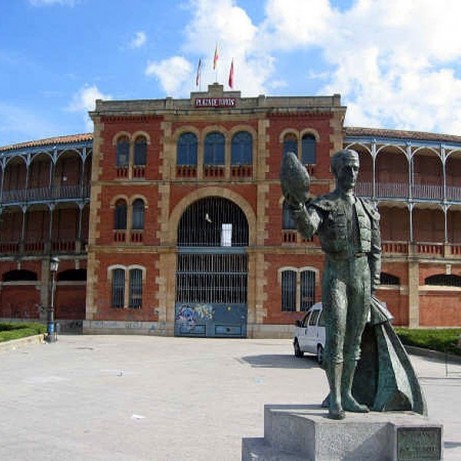 Bullring was built in the 19th century, with the project of the architect Cecilio González Domingo. The square is located between highways Fuentesaúco and Valladolid, and was inaugurated on September 11, 1893. That day participated the bullfighters Mazzantini and Lagravere, Eloy Clairac cattle bulls. In the square held most bullfights, although sometimes other shows take place. The square is cataloged within the eclectic architecture that stands out for the use of the iron that gives great slenderness and lightness to its upper gallery.

The main celebrations that are held in the arena of the roundabout are:
the feast of the Virgin of la vega on September 8 (advocation of the Virgin María Patron Saint of Salamanca), traditional celebration on the occasion of the day of San Mateo on September 21 and the day of San Juan de Sahagún on 12 June.
The Virgen de la Vega, is the patron saint of the city of Salamanca for centuries. The legend says that the Virgin helped the citizens and defended them from the onslaught of the troops who wanted to invade it in 1706 during the war of the Spanish succession. Salamanca fairs have their origin in the agricultural fair which formerly was held during the month of September, next to the Roman bridge, on the left bank of the Tormes River.

Request information and advance tickets booking for all bullfighting events in Salamanca: You may book in advance and be the first to purchase tickets to any event at the Salamanca Bullring. Servitoro delivery service offers the User the opportunity to acquire the tickets in a safe and easy manner from his/her home address, avoiding long queues before ticket offices. Complete the request information about Salamanca. Once we have the tickets On sale, we send you a booking confirmation e-mail for make your definitive order. Servitoro offers to non-residents the opportunity to deliver the tickets to hotels, hostels and similar during their stay in Spain and coinciding with the bullfight event (2-4 days before the show).