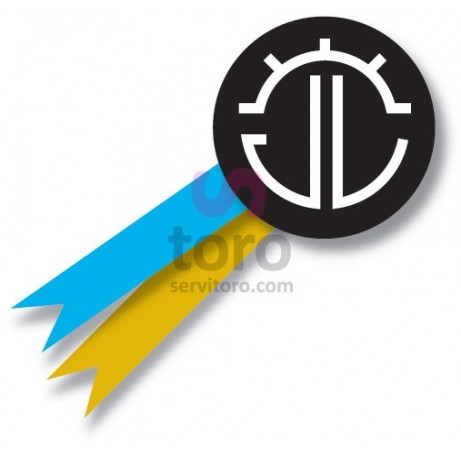 Ear signal: Split in the left side and orejisana in the right.

History: It comes from the one that don Carlos Conradi of don Rafael Laffite acquired in 1885. One of two branches in which it divided was in the same year for don Francisco Gallardo. In 1890 don Jose Moreno Santamaría acquires it, and for death of this one, in 1910, it divided, being a part for his brother don Anastasio and other one for his nephews don Francisco and Brown don Justo Jose Santamaría.In 1923 it increased with a lot of cows native to Fields Beach Her, being divided in 1948 between don Jose and don Francisco, the original iron and currency being awarded to don Francisco, and for death of this one, it happened in 1955 to don Jose Rufino Martin, who her sold in 1976 to don Gabriel Hernández García, being eliminated in its entirety the beasts of this origin, acquiring in 1978 cows and breeding of dona Carmen Borrero, proceeding from don Atanasio Fernandez. In 1997, and under the protection of the article 6 º of the Bylaws, this ranching was formed by the part that corresponded to don Gabriel García Sanchez, who in turn had been increased in 1988 by beasts of " The Bayones ".

In 2003 the company, Cattle Developments Parishioner, S.L., he buys the rights of the iron, changing the same one, besides the currency and the sign of ear. One happens to announce " Táliga's Bulls " and forms the ranching with D. Francisco Ojeda's cows (origin D. Juan Pedro Domecq y Díez) with cows, of " The Ravines " and the D. Francisco Ojeda's breeding one and other one of " The Ravines ".