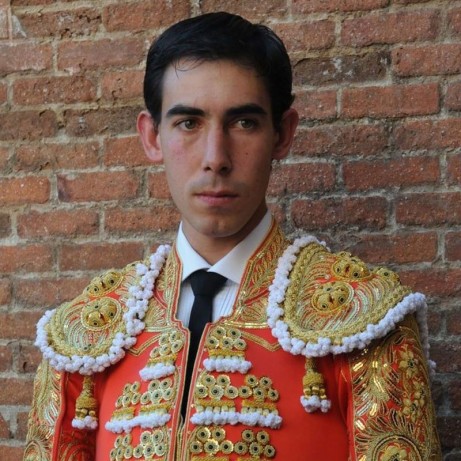 Alternativa: (Is a ceremony in which a bullfighter authorizes a novice to take his place among the doctorate bullfighters). Bilbao, on August 24, 2011

Confirmation:  (It's when the bullfighter confirms his "alternativa" or doctorate). On May 16, 2013

Saúl Jiménez Fortes is a son of the one that was novillera Mari Fortes and of the banderrillero and bullfighting businessman Gaspar Jiménez. Pupil of the School of Bullfighting of the Deputation of Malaga, put for the first time in front of a snapdragon nine years after age. It dressed his first triad it sedates and I pray in Benalmádena's of Malaga locality. During this first stage he was a winner of the Contest II International of Bullfighting Schools of Malaga, second classified under the bullfighting Jobber of Guadalajara, semifinalist of the televised feasts Pedro Romero of Andalusia and better herdsman of the province of Huelva.

It made début with horsebreakers on March 8, 2009 in Benalmádena, to fight a confinement of Barley Stammerer I run to hand with Ismael Cuevas. In this time it has suffered two mishaps of consideration. He appeared in The Sales on March 20, 2010, running through utreros of the ranching of Virgin Mary together with Fernando Tendero and Sergio Blanco, without many fortune, but it was something later when again in Madrid it demonstrated his big qualities opposite to Murteira Grave's beasts. Fruit of this action, on the following year it did the walk three evenings in this square, being hurt in San Isidro's fair for a bull of Flower of Rockrose. It took the alternative in Bilbao on August 24 of this year, of hands of The Juli and Talavante's testimony, to complete Jandilla's bulls.

Last year triumphed in many of the squares in those that it was announced, being in addition one of the bullfighters revelation of the season. It cut ears in Pamplona, Santander, Almeria, Valladolid or Saragossa. In Bilbao it led a great evening, with Juan Pedro Domecq's bulls