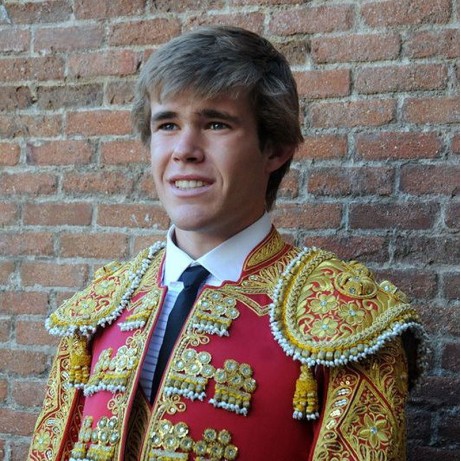 Javie Jiménez Avecilla, born in Espartinas in 1990. He is one of the young bullfighters who have arrived with force and asking for a place, as he has shown in 2016. This year he is present in the main fairs...

Public debut: On June 22, 2016 in his hometown, and the following year he fought in Portugal his first bullfight without biting.

He debuted with picadors: Ciudad Lerdo (Mexico), April 3, 2010, on a poster completed by Luis Conrado and Ignacio Escobedo with young bulls of San Antonio de Triana.

Debut in Las Ventas: The April 10, 2011 I acartelado with Francisco Pajares and Angelino Arriaga with Borja Sierra steers and Ana Muñoz.

Alternative: in Seville sharing the stage with Enrique Ponce and "El Cid" with bulls of Juan Pedro Domecq and Parladé on May 3, 2014

He confirmed the alternative in Madrid on August 15, 2015 acartelado with Carlos Escolar "Fracuelo" and Teruel Angel Santiago Domecq bulls.

Born in the same location as the killer of bulls Seville Juan Antonio Ruiz "Spartacus" maximum figure of bullfighting in the late eighties, Javier Jimenez took his first steps in the profession in the Bullfighting School of Espartinas.

He debuted with mounted in Ciudad Lerdo (Mexico) on April 3, 2010, to deal a lockdown of San Antonio de Triana next to Luis Conrado and Ignacio Escobedo. Shortly thereafter, on August 8 he did the same in the Plaza Mexico, where he cut off his ear. Back in Spain he completed a short but interesting campaign. On September 19, he appeared at the Maestranza in Seville, giving back to the arena. The 2011 season was its explosion as a bullfighter.

No luck in Madrid, where he paseíllo on April 10, and at a good level in Seville, Zaragoza triumphed in the March 21, cutting two ears to a utrero Los Maños. This victory opened the doors of fairs and began to add wins and contracts, never turning his head, as he grappled novilladas Miura, Murteira Grave, Prieto de la Cal or Cebada Gago. He was the winner of cycle novilladas Algemesí of the fair Calasparra Rice and won the Gold Piquillo Lodosa, ending the year with 37 performances and 46 ears. Last year again scored a large number of contracts. He goaded two afternoons in sales and succeeded in Calasparra and Algemesí, among other places.