The student of the Bullfighting School of the Community of Madrid José Cubero "Yiyo" was proclaimed winner by majority vote of the jury.

There were Jandilla bulls for the final and a bull of José Luis Marca that caught the novillero with picadors Adrián Henche, who was injured with a reserved prognosis and could not continue the fight. The outstanding bull was also caught, so the second steer was not fought. Jesús García, from the Escuela Fundación El Juli, who cut an ear; and Diego San Román, from the Bullfighting School of the Community of Madrid José Cubero "Yiyo", completed the line-up of the finalists.

Alejandro Rodriguez surprised and pleased in the greeting to the second of the afternoon by veronicas. He risked a lot in banderillas and highlighted his temper in the last two series, with outstanding handling of how to hook and carry. The failure with the descabello ended up tarnishing the work and he received a standing ovation. The same happened in the fifth of the afternoon, which he received with a farol de rodillas in the third. Compared to the good condition and quality of the first Jandilla bull, this one was more complicated. Again in the banderillas he called the attention and with the muleta he showed dedication and pundonor, suffering two strong volteretas for which he did not change his concept. There was a request for an ear and he went around the ring.

Diego San Román began the third bullfight of the afternoon without probing and in the natural way in the middle, after toasting his father. He showed seriousness, commitment and natural courage and saluted after a low thrust. In the penultimate of the afternoon he also suffered somersaults and maintained the stillness as the basis of his concept, trying to link more series. He killed with a estoconazo.

Jesus Garcia cut an ear in the fourth, a Jandilla bull of great quality. The main virtue of his work was the linking, with a broken bullfighting of the waist and lengthening the muletazo. His performance lacked reunion, also in front of the last bull that had mobility and repeated with transmission, with which he could also have won a prize had it not been for the successive punctures.

The bullfighter with picadors Adrián Henche suffered a somersault in the first of the afternoon, a bull of José Luis Marca to which he had to kill the outstanding Víctor Manuel Rodado, who heard the three warnings and had to be treated in the infirmary. He could not continue the fight, so the second bull was not fought. 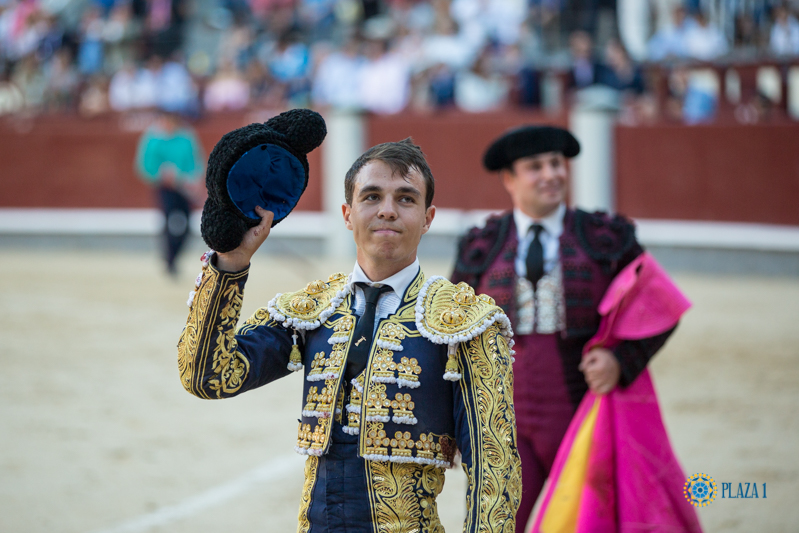