Manuel Díaz 'El Cordobés', Víctor Janeiro and Julio Benítez 'El Cordobés' will perform on March 24 at the Bullring in the town of Cádiz

The Hotel Ocurris of Ubrique hosted the presentation of the 'Corrida de la Piel 2018', in which two very bullfighting dynasties, the one of the 'Cordobeses' and the 'Ubrique', will meet next Saturday.

The three bullfighters were present at the event: Manuel Díaz 'El Cordobés', Víctor Janeiro and Julio Benítez 'El Cordobés', accompanied by the Town Councilman of Celebrations of the town, José Manuel Fernández and the General Director of Grupo Vientobravo, José Antonio Cejudo; and, as it could not be less, with a large group of public and fans that filled the venue.

The 'paseíllo', which will be the first to make Julio Benítez in this Plaza and will also be his reappearance in the bullrings after his motorcycle accident once the celebration of Andújar has been postponed, will start at five in the afternoon, and will jump to the 'albero' (sand of the bullring) of Ubrique six chosen bulls from the bullfighting ranch of Núñez de Tarifa. 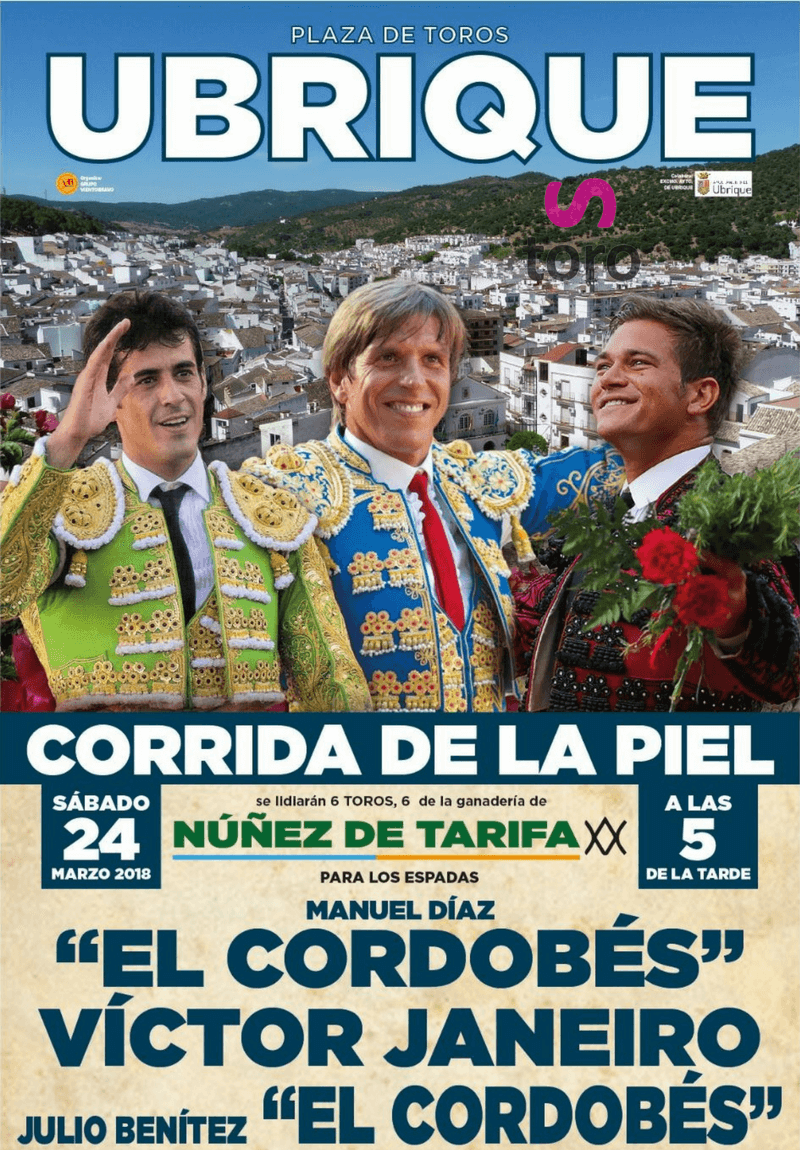 Presentation of the mixed bullfight of Andújar

The meeting took place on Friday in the 'Sala de Caballerizas' of the Palace of 'Los Niños de D. Gome' with the presence of the brothers Manuel Díaz 'El Cordobés' and Julio Benítez 'ElCordobés'

The company Grupo Vientobravo presented this weekend the poster of the mixed bullfight that will take place this Saturday, March 17, in the Jaén town of Ándujar. It will be a celebration led by the horse-bullfighter Léa Vicens, who will face a bull from Peralta; will be followed by the bullfighters Manuel Díaz 'El Cordobés', El Fandi and Julio Benítez 'El Cordobés', who reappears after the serious motorcycle accident he suffered last year, with bulls from Roman Sorando.


In a relaxed atmosphere, the two brothers 'Cordobeses' conversed with the General Director of Grupo Vientobravo, José Antonio Cejudo and the mayor of the town, Francisco Huertas; presented and moderated by the Director of 'Toros para Todos', bullfighting program of Canal Sur Televisión', Enrique Romero. 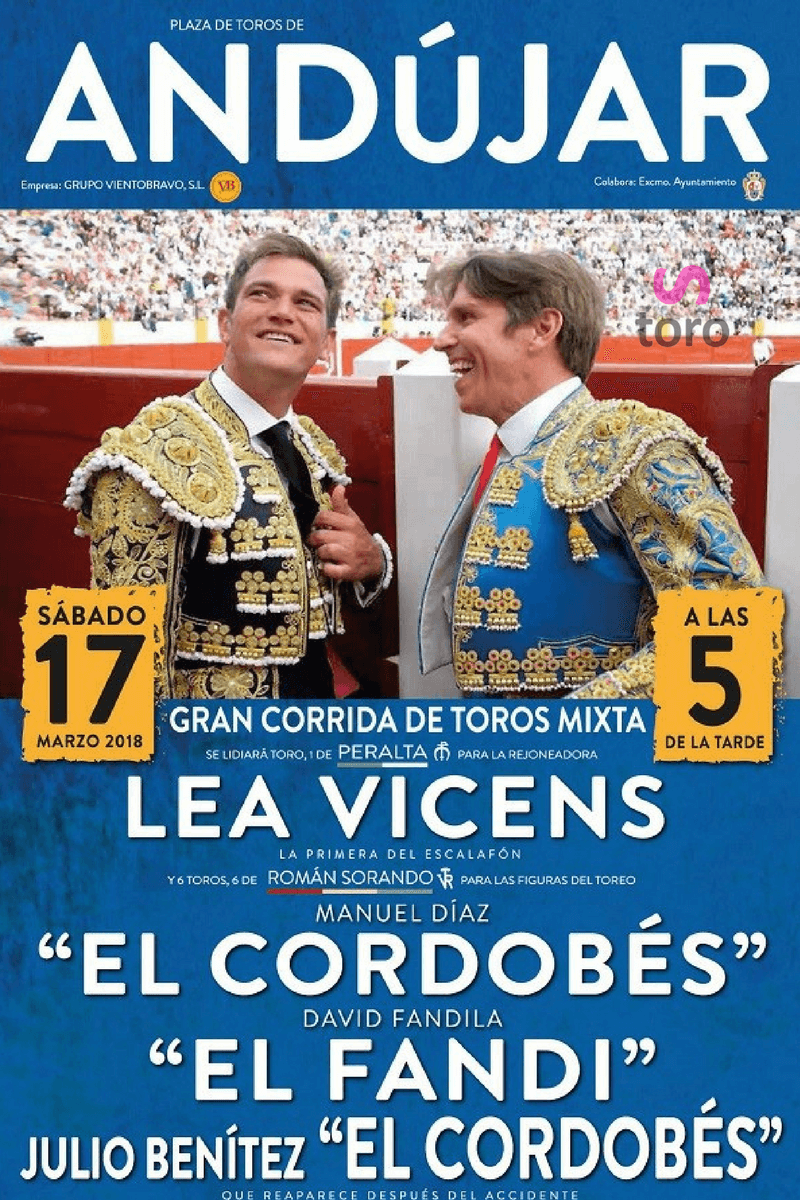 Postponed because of weather, it will be celebrated next March 31, Holy Saturday

The manager of the Plaza de Toros de Vera, Grupo Vientobravo, has announced the details of the Charity Bullfighting Festival that replaces the one postponed on 4 February due to the inclement weather. The company has managed to finish a large poster to benefit Manos Unidas of the town of Almería province.

It will be celebrated on March 31, Holy Saturday, starting at five in the afternoon. Will make the 'paseíllo' the horse bullfighter Andy Cartagena; the bullfighters Manuel Díaz 'El Cordobés', Cayetano, López Simón and Filiberto; and the steer bullfighter Jorge Rico. Two steers from Soto de la Fuente and four from Manolo Blázquez will be fought.

The bullfighting company Grupo Vientobravo continues to grow, now with the concession of the Bullring of Ubrique (Cádiz) from the hands of its City Council, after the good business management carried out last season, in the bullrings it managed.

There will be several bullfights organized in the beautiful town of the Route of the White Towns of Cadiz, the first of which will be held on March 24, Saturday. A bullfight that will have many attractions and will be presented in a few days.

Another of the great objectives to be carried out in this bullring, will be the celebration that is organized, in the month of September, within the activities of the Ubrique Fair 2018, or Major Festivals in honor of the Patron of the town, Our Lady the Virgin of the Remedies.

Grupo Vientobravo has organized a celebration where will act the horse bullfighters Joao Ribeiro Telles, from Portugal, and the Spaniards Francisco José Alcázar and Pencho Solano, from Lorca and Cartagena respectively.

In addition, for the first time in the region of Murcia, the Group of Forcados Amadores de Portalegre will practice several faults, throughout the celebration. 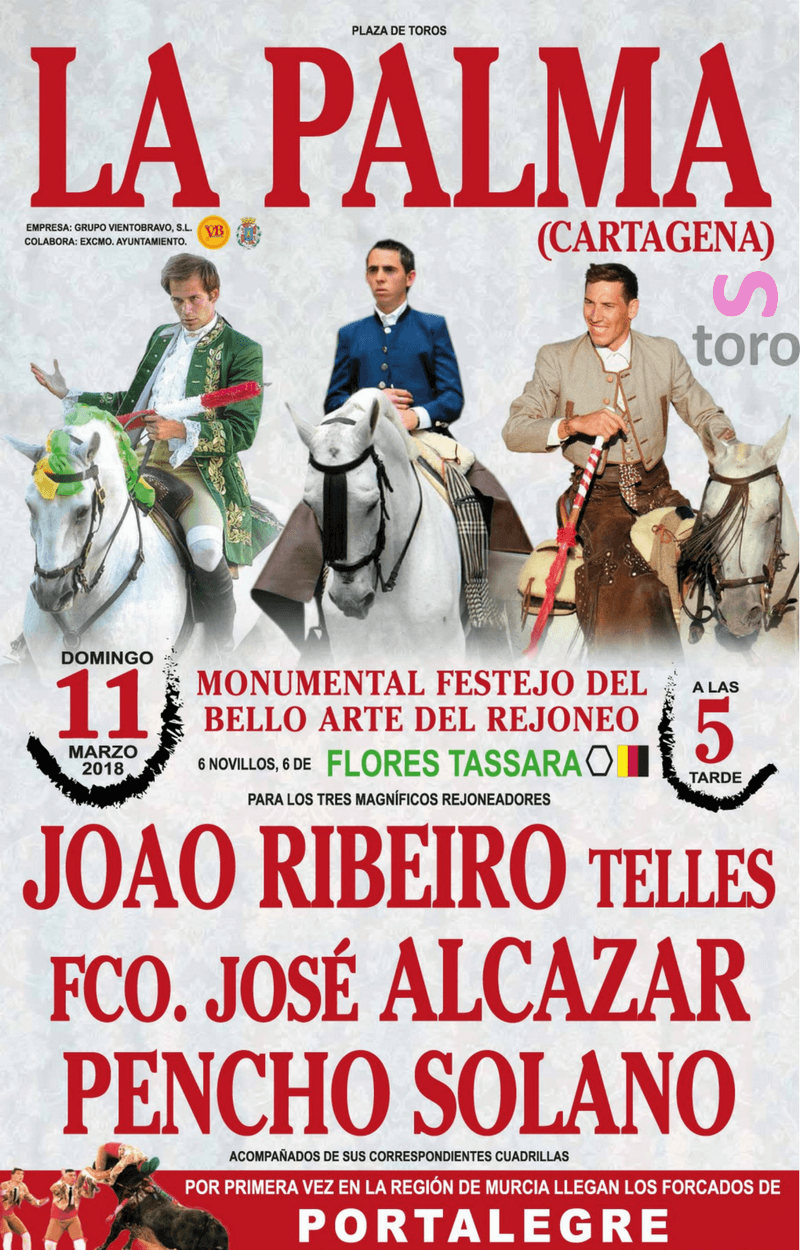 The Cordovan town of Palma del Río, birthplace of 'V Califa del Toreo', will hold a mixed bullfight next Saturday, March 10. The celebration has been presented in the house-museum dedicated to Manuel Benítez 'El Cordobés' and has counted with the presence of the two bullfighters of the poster, the mayor of the town José Antonio Ruiz Almenara and José Antonio Cejudo, director of Grupo Vientobravo.

The horse bullfighter Lea Vicens will face two Peralta bulls while the bullfighters 'El Cordobés' and Javier Benjumea will do with four of Carlos Núñez. The celebration will start at 5:00 p.m.

Next February 28, the Andalusian Community festivity, the Bullring of Montoro hosts a celebration in which the bullfighters Borja Álvarez, Lagartijo and Rafael Reyes will ficght in front of steers from the fighting bull ranch of Los Ronceles.

The Vientobravo Group, led by José Antonio Cejudo, has presented the poster at the Mirador Hotel of Montoro together with the acting bullfighters, the farmer Francisco Jiménez and Ana María Romero, mayor of the town.

Aracena will host a charity festival on February 25

The celebration will begin at 12.00 pm and the fighting bull ranches will be announced in the coming days. 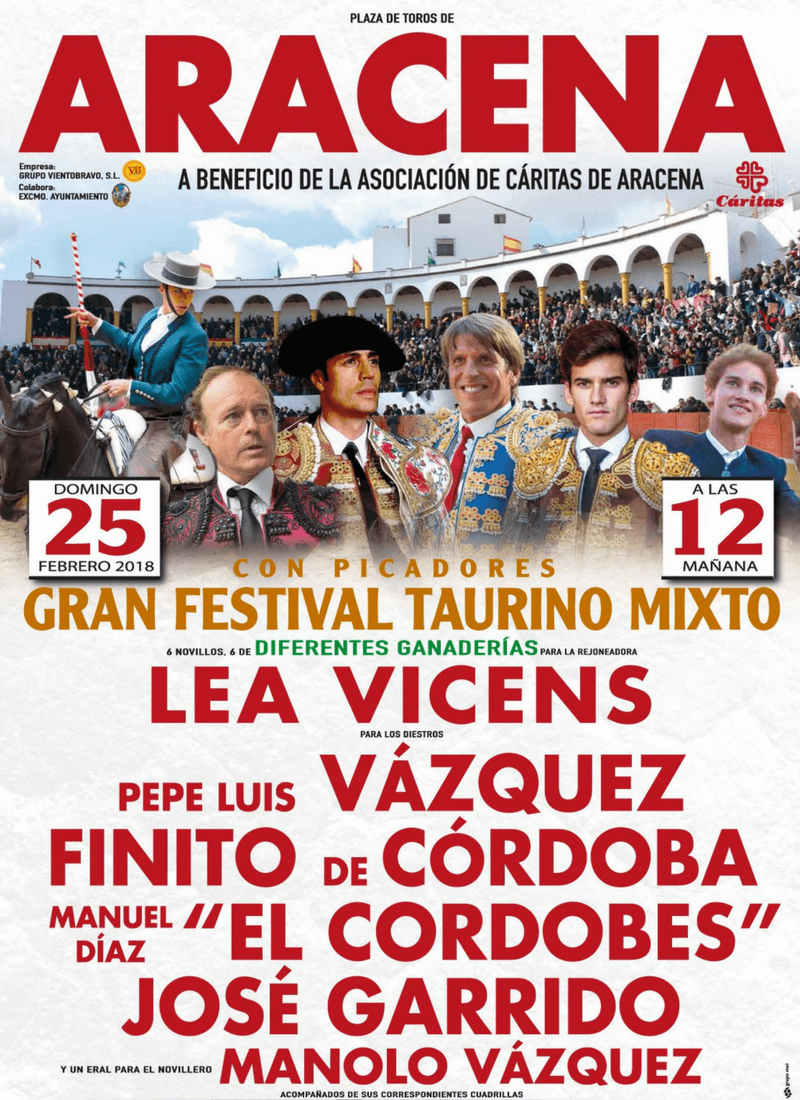 The management company of the Bullring, Grupo Vientobravo, and the City Council of Vera have organized a mixed festival that will open the horse bullfighter Lea Vicens followed by the bullfighters El Cordobés, Juan José Padilla, El Fandi, Filiberto and the steer bullfighter Jorge Rico. The bulls will be from the iron of Soto de la Fuente.

On Tuesday the poster was presented in the meeting room of the town hall of Vera, with the presence of its mayor, Félix López; the representatives of Manos Unidas Vera; Rosalía Núñez, president of the local assembly and Carlos Fortes, parish priest of the municipality, next to the bullfighting businessman José Antonio Cejudo.

Felix López grabbed Grupo Vientobravo this initiative that "will help an association that moves and works for many people, not only locally, but throughout the world." He also congratulated Manos Unidas for "the important work which does with projects for the benefit of education and social integration" and wished that "all the people are becoming a little more supportive and more aware that they are needed, not only at the local level, but global ".

Carlos Fortes and Rosalía Núñez wanted to thank the City Council and the bullfighting company for their commitment and support for an organization that "represents the charity of Christians and the Church", in this case in the most depressed areas of the continent.

The company will donate 2 euros for each ticket, whatever its price. 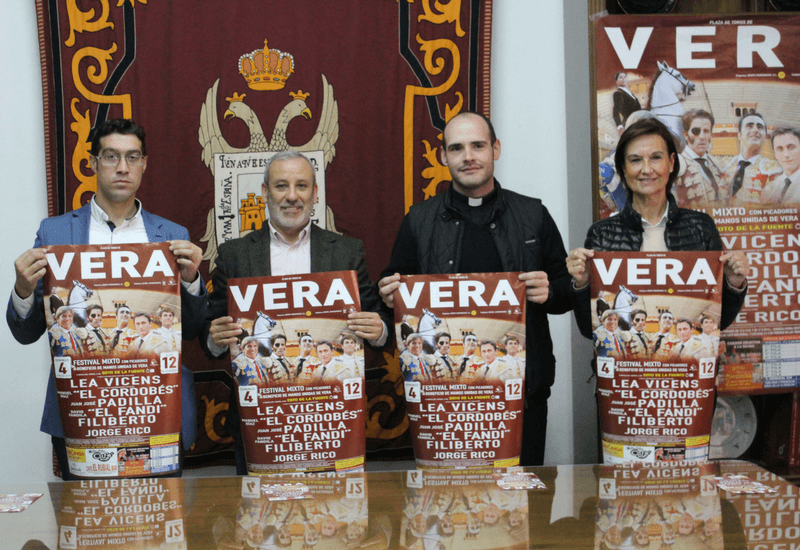 Presentation of the poster with its protagonists.

Granada will start the season in Motril

It will be next February 18 with a charity mixed festival

The Vientobravo Group will begin the bullfighting season in Granada with a festival to benefit the Local Assembly of the Association of the Fight against Cancer of Motril, where main figures of bullfighting will make the 'paseíllo'.

A bull of the fighting bull ranch of Soto de la Fuente for the horse bullfighter Diego Ventura and another five from Las Azores for the bullfighters El Cordobés, El Fandi, Cayetano, López Simón and the steer bullfighter Antonio Ganivet, make up the poster. The bullfight will begin at 12.00 on Sunday, February 18. 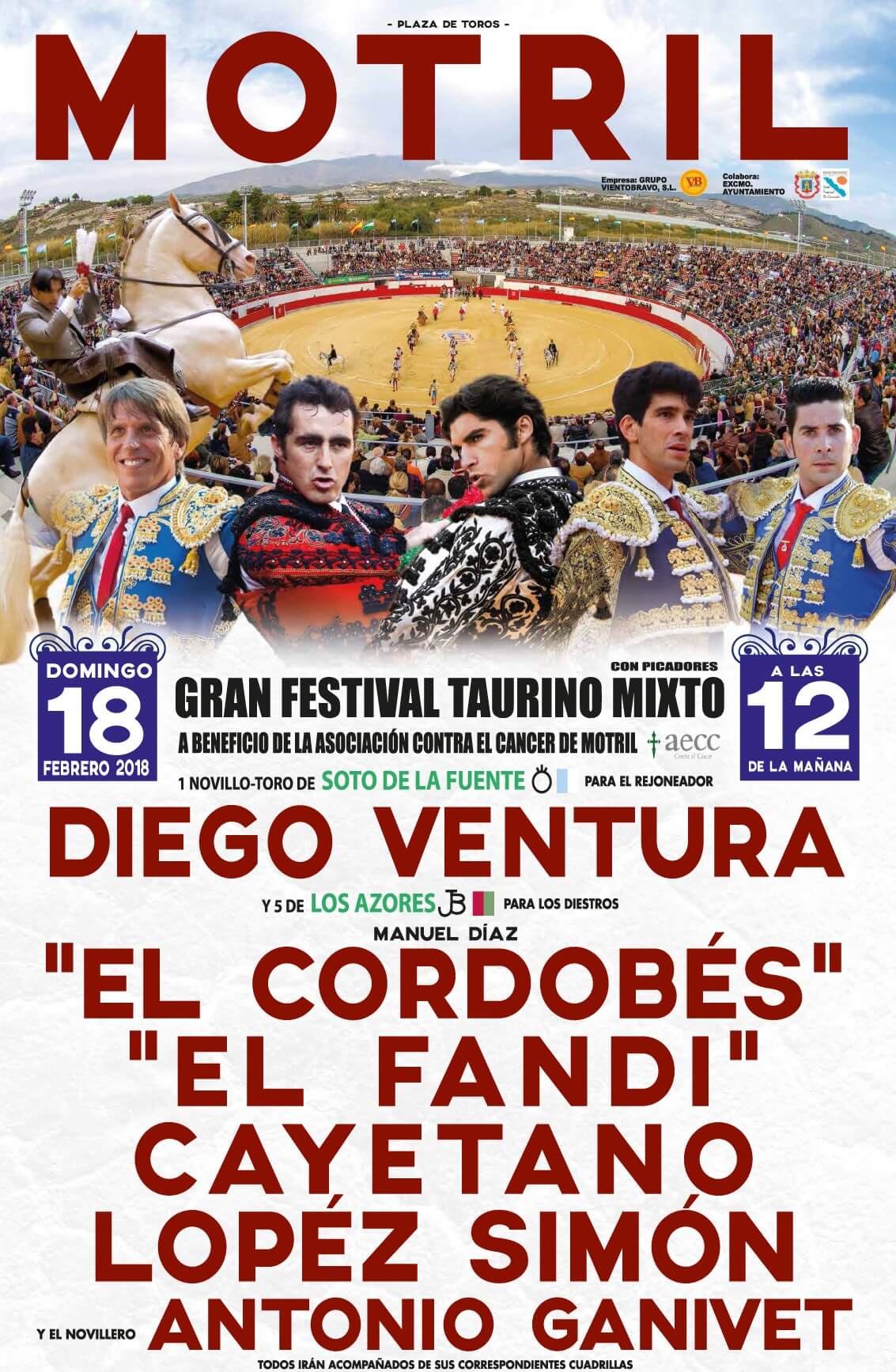