The best bullfighters star in the April Fair 2020

The best bullfighters star in the April Fair 2020

15 bullfights, a horse-bullfight and seven steer-bullfights make up the season ticket of the Sevillian bullfighting season, which will reach the same number of shows of last year: a total of 23. As is tradition, the first date in the Real Maestranzaof Seville will take place on Easter Sunday, April 12, with Morante de la Puebla, Alejandro Talavante and Roca Rey in front of bulls from Garcigrande - Domingo Hernández. Talavante's will be the first afternoon in Spain after his withdrawal in 2018; he returns to the arena on April 11 in Arles.

The Pagés Company has presented a great cycle starring bullfighting figures and with the presence of emerging youth. In fact, three of them will make their presentation in the Bullring of Seville: Juan Leal, Juan Ortega and David de Miranda. Seville Fair, which will begin on April 19 and will run until May 3, will be headed by Pablo Aguado who will perform three afternoons; and two will be done by Morante de la Puebla, El Juli, Miguel Ángel Perera, José María Manzanares, Alejandro Talavante and Roca Rey.

About the fighting-bull ranches, the iron from Cádiz Núñez del Cuvillo will be also twice, specifically on April 30 and May 2. And of course the bulls from Victorino Martín and those from Miura will be present to close the Fair.

The steer-bullfights and San Miguel Fair

Faithful to its commitment to the quarry, the traditional contest of steer-bullfights will be celebrated between May and June. In addition, San Miguel also will have a steer-bullfight where will act, hand in hand, the winners of the contest prepared by the Fighting-Bull Foundation with the Govern of Andalucía.

Two bullfights on September 26 and 27 with luxury posters complete this essential appointment at the Maestranza. 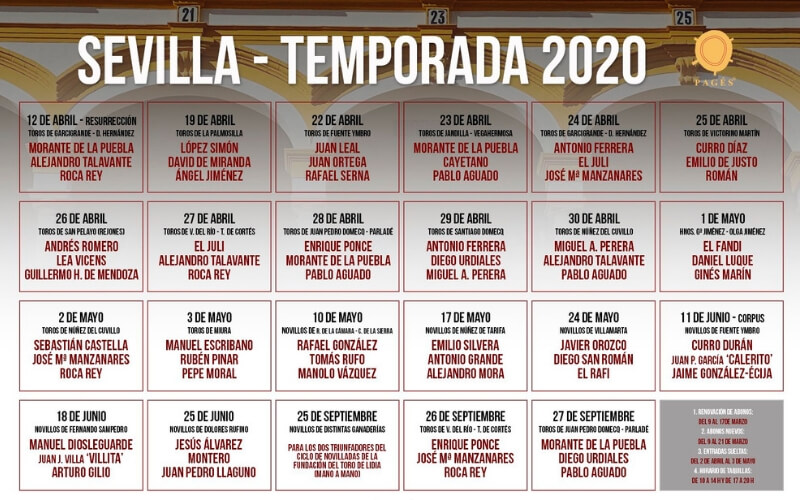