They will take place on Sundays September 8, 15 and 22; in addition to a steer-bullfight from Los Maños on day 1

The Livestock Challenges return to the Monumental Las Ventas with a first Rehuelga vs. Pallarés on day 8 and a second Arauz de Robles vs. Saltillo on 23. As a novelty there will be a Contest Bullfight on September 15 in which the irons of La Quinta, Baltasar Ibán, Marqués de Albaserrada, Murteira Grave, Pedraza de Yeltes and Valdellán will be measured.

As usual, these bullfights will give prominence to the complete fight, marking the lines for the horse in the ring and three others to measure the distance from which the bull is started.

The summer of opportunities in Las Ventas

After the final of the Nocturnal Promotion Steer-bullfights Contest, which will take place this Thursday, August 1 between Rafael González and Tomás Rufo hand in hand, comes the summer program of the Madrid Monumental.

The Madrid Bullring is, above all, the one that gives and takes away and this summer it will be exactly eight young bullfighters who are debuting in search of their place in the ranks. Four steer-bullfights on August 11, 18 and 25 and one more on September 1 will be their great opportunity.

In addition, the traditional celebration of the Virgen de la Paloma will take place on August 15 with a bullfight from Martín Lorca for the bullfighters Fernando Robleño, Sebastián Ritter and Juan Ortega.

Las Ventas announces the first posters of the bullfighting season

Today we have known the poster of the steer-bullfight that will open the season 2019 in the Bullring of Las Ventas, as well as the combinations of the first two bullfights, scheduled for Palm Sunday and Resurrection Sunday.

In addition, after the first steer-bullfight on March 24, two more will be held on Sundays after, on March 31 and April 7, which posters will be known in the coming days. As for San Isidro, it seems that finally there will be no draw and all the secrets will be unveiled at a grand gala on March 22.

The first official appointments are as follows: 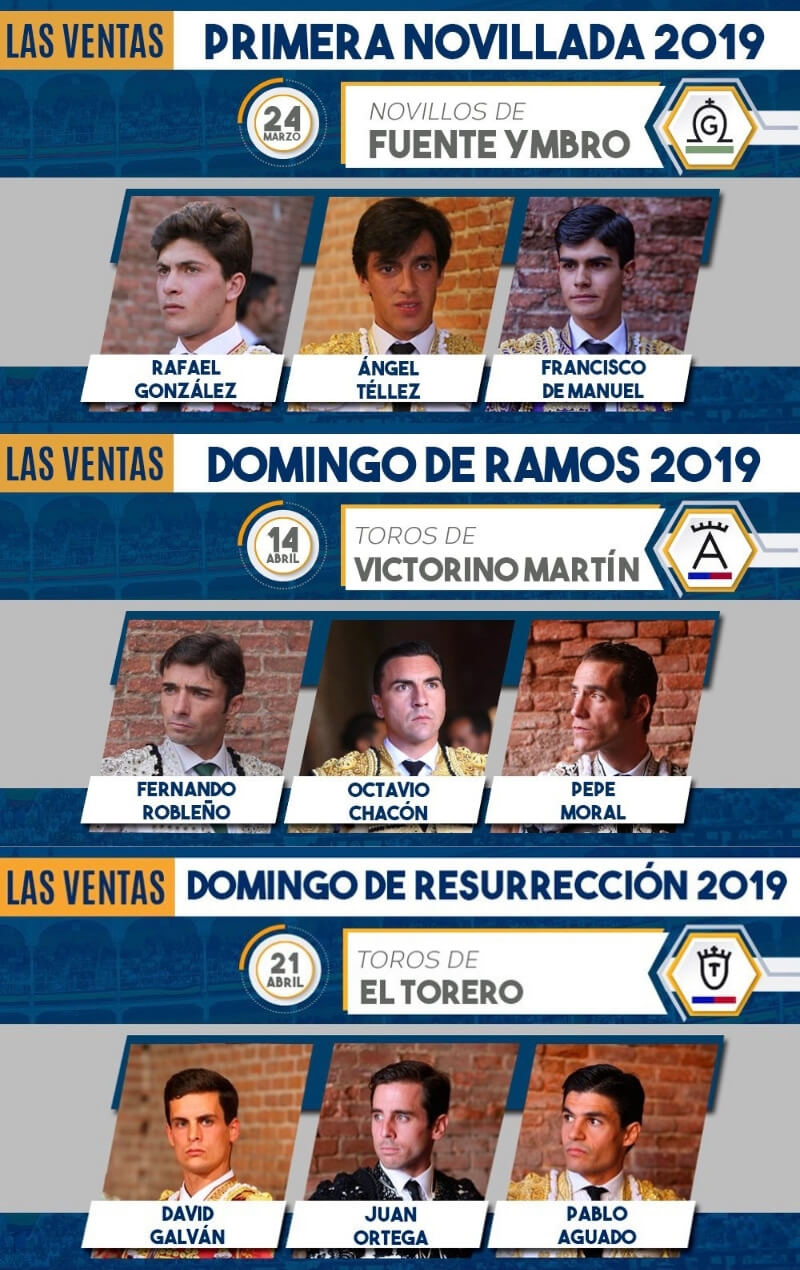