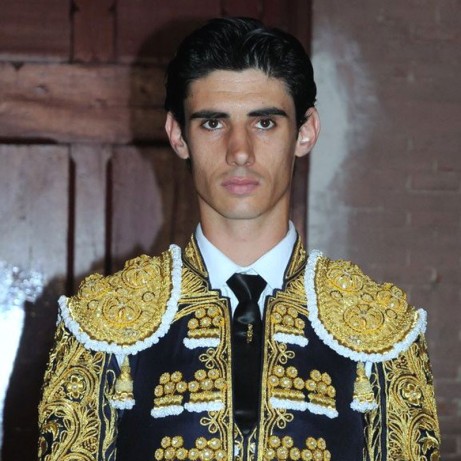 He debuted with picadors: In Sepúlveda (Segovia) on 29.08.2009 on a poster completed by Ivan Perez and Pablo Belando with Juan Manuel Criado steers.
Debut Sales: On June 13, 2010, Touching the large door with a bullfight of Rehuelga (Santa encaste coloma), in which short an ear to the request from the second to the first and circled the ring with strong request in his second. Whether earning a deserved place in the Autumn Fair, with steers D. Jose Luis Pereda. Where would please the fans waving Ventena another ovation.

Alternative: In Madrid sharing the stage with "El Fundi" and Juan del Alamo with bulls of José Luis Pereda the April 8, 2012

Bullfighter died in the Teruel Bullring on July 9, 2016

He made his debut as a bullfighter without picadors on July 13, 2008, in Las Ventas de Retamosa (Toledo), with bulls of Boyeril, cutting four ears and a tail.
He finished the 2008 season with 24 celebrations in which cut 45 ears and 6 tails.Being recognized as the best bullfighter fairs Herrera del Duque (Badajoz), Sepulveda (Segovia) and as winner of I Contest Segovia-center.

In 2009 he was dismissed as a bullfighter without picadors after 38 celebrations in which he got ears 65, 6 and 2 tails pardons, in places such as Arles, Vistalegre, Albacete, Palencia, El Puerto de Santa María, Leganes, San Fernando ...

He is awarded with trophies "Manuel Cascales Hilla" in Los Felices (Murcia), El Pino de Plata, Fair Huertas del Rey (Burgos), in addition to the award for best task and remove more attractive. Achiever of the novilladas of Soria and Algete.

Finished the season with 10 bites novilladas in which he cut 23 ears and a tail and winner of the contests of novilladas of proclaimed: Collado Mediano, Guadarrama, Mentrida, and Hoyo de Manzanares, he was also awarded the trophy more Mesonero de Castilla, the bullfighter highlight of the province of Segovia.

Thus he began a season, which would be present in all major fairs novilladas and the best of the moment, positioning itself as a figure of the bullfighters to proclaim Winner: La Espiga de Oro in Calasparra (Murcia), The Potter Gold Villaseca de la Sagra (Toledo), the Frascuelo Silver in Moralzarzal (Madrid), Best novillero Fairs Guadarrama, Collado Villalba, Collado Mediano, Sepulveda, Castle Bayuela ... was also measured with bullfighters in two mixed bullfights, Cantalejo Segovia and where I reap 2 new Great Gates.

So the Segoviano skilled and closes an unblemished season in which he has fought 26 heifers and 3 festivals, adding in his large basket a total of 62 ears and 7 Rabos.

All information of your favorite bullfighter segoviano Victor Barrio, biography, alternative, in Servitoro.