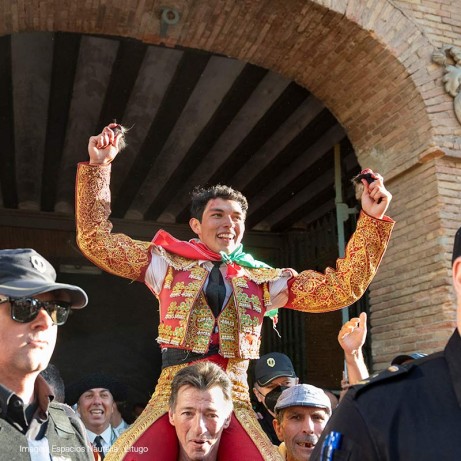 Debut of lights: on February 6th, 2016 in the Cinco Villas bullring, cutting 2 ears to copies of El Batán that were named "Chocolatero" and "Manzanito".

Debut in Las Ventas: on October 14th, 2018 in a Novillada without Picadores in which it was the contest "Camino hacia Las Ventas", late in which it is proclaimed winner of the contest when managing to give a "Vuelta al Ruedo" in his first and to cut 1 Ear of his second, of the livestock of Jandilla.

At the age 11 years old he joined the project "Tauromaquia Michoacán", bullfighting school, directed by Jacobo Hernández in the city of Morelia before formally introducing himself as Novillero without Picadores, Isaac has about 30 bullfighting festivities such as bullfights.

On 2016 and 2017 Fonseca adds 13 Novilladas without Picadores and manages to cut 14eEars in Mexican bullrings.

On year 2018 adds one more afternoon in the Plaza de Toros "Mexico" in the contest "Soñadores de Gloria" leaving a pleasant impression and positioning itself as one of the novilleros without picadores of greater interest in Mexico.
In the same year, he entered the Bullfighting School "Miguel Cancela" of Colmenar Viejo to start a European career and continue his evolution and learning. Then, he add 13 Novilladas without Picadores and one Festival, obtaining several resounding triumphs.
He debuts in Spain in the Bullring of "El Molar" where he manages to cut a tail. He was awarded as Twinner of the "Fuente del Toro" contest. Also he kills bulls in Bayonne, Salamanca and get outputs on shoulders in Valdelaguna, Aldeadávila, Cerceda, Fuentidueña, Algemesí, Hoyo de Pinares, Huerta de Rey and Brea de Tajo.

He was awarded as winner in several fairs of Novilladas as Collado Mediano, Collado Villalba and Huerta de Rey.

The end of season 2018 was marked by the resounding victory in the bullring "Las Ventas", rising as winner of the "Camino hacia Las Ventas" contest.