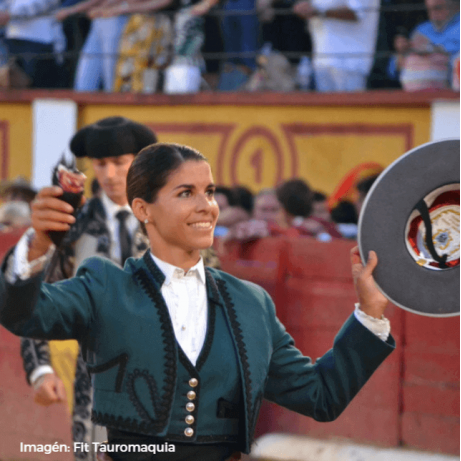 Born in Nîmes, a zone lover of the traditions, and of knowledgeable and respectful parents of these codes and rituals who make this land big marismeña of the Camarga Francesa, Léa grew between horses, bulls and riders, being forged as one of them thanks to his effort and the participation in diverse contests of outdoor labors. A series of meetings brought it over to the world of the brave field and of Marialva's art. It was, nothing more not less, that the centaur D. Ángel Peralta who, with his longest path and experience, could see at once the talent that this French young woman was possessing.

It is at the time when he proposes him, without the minor doubt and of spontaneous form, that THE DEW should form a part of his equipment of tamers in the " MESS ", in It her Populates of the Rio (SEVILLE), cultivates where they graze his fighting bulls and Cartusian horses. Already in Andalusia, Léa turned into his disciple, the inheritor of this centaur ue during decades introduced this art. For four years, from the dawn up to the dusk, this Amazon has been gaining his gallons him, taming his own horses, refining his bullfighting, forging a style seated in his personality, being prepared in the intimacy, fighting cows and bulls privately, being done rejoneadora.

Four years of hard labor for, finally, October 2, 2010, to feel the first flavors of the awaited reward: his presentation publicly. The appointment was in Olmedo (Valladolid), where it was possible to glimpse the fruit of this illustrious school torera. The letters were played and Léa turned officially in rejoneadora, integrating the bullfighters' army register astride. After the first season of filming, it expired with a brilliant season in 2012 (27 commitments, 60 ears and 10 tails), achieving the unanimity between the professionals and the specialized press, who recognize and praise the taming, moderate prank and elegance of this young woman and promising French.

Request information and advance ticket booking for all the bullfights Lea Vicens. Booking.