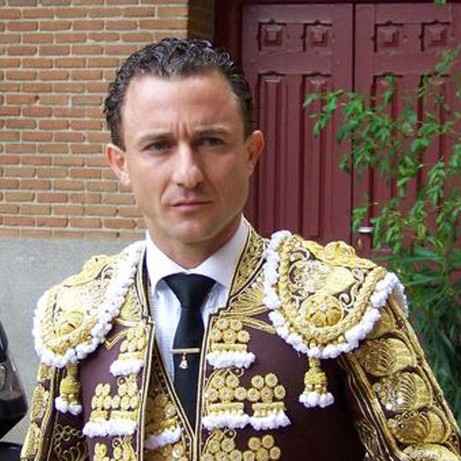 Reserve your bullfight tickets for Rafaelillo

Alternativa: (Is a ceremony in which a bullfighter authorizes a novice to take his place among the doctorate bullfighters). On September 14, 1996 Murcia.

Confirmation:  (It's when the bullfighter confirms his "alternativa" or doctorate).On July 27, 2003 The Sales, Madrid.

Rafael Rubio Luján Known artistically as "Rafaelillo" is a Spanish bullfighter characterized by the fight of bulls proceeding from considered "hard" ranching. I take the alternative in his natal city on September 14, 1996 of hands of Enrique Ponce and Francisco Rivera Ordoñez as witness. It made début with horsebreakers on February 26, 1995 in Nimes, sharing cartel with Jose Tómas y Lusito. On September 14, 1996 it realized his doctorate in the city of Murcia and possessed Enrique Ponce's participation as godfather and Francisco Rivera Ordóñez as witness. The bull of his alternative of name "Opereto" was proceeding from Salvador Domecq's ranching and it cut an ear.

On July 27, 2003 his confirmation realized in the bullring The Sales, with beasts proceeding from the ranching The Jaral of Look, and a return was granted to him by the result of his task to the bull of "Rabid" name to the turn. His godfather was Alberto Ramirez and the witness of the feast was Lopez Chaves. On May 27, 2007 it confirmed his alternative in Nimes, with bulls of Hubert Yonnet's ranching, and with Denis Loré as godfather and Juan Jose Padilla as witness. On April 30, 2011 it received the Wizard's award of the Year that grants the Federation of Rocks Festeras of Sewer on the occasion of the Holidays of the Witch, declared of Tourist Regional Interest.