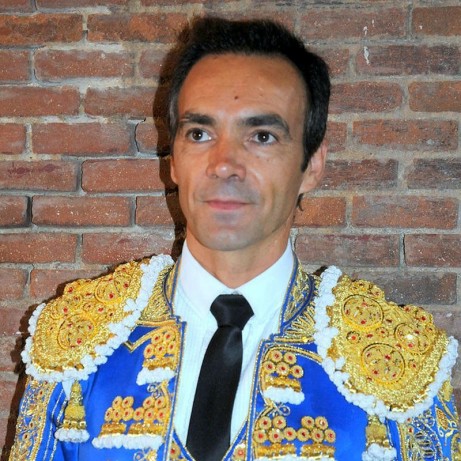 Manuel Jesús Cid Salas was born in Salteras (Seville) in 1974 and took the alternative in 2000, in Las Ventas, after a long and hard road as a steer-bullfighter. He retires in 2019 after 19 years as a bullfighter.

* Photographs by Coso de la Misericordia, from his last performance in Spain.

Debut with picadors: on September 6 in Salteras (Seville) with Pedro Cid ‘El Paye’ (his brother) and El Umbreteño. He cut three ears and a tail to his steer from Antonio Muñoz.

Debut in Las Ventas: March 19, 1995 with steers from La Guadamilla. He shared the poster with Antonio Cutiño and Luis Sierra.

Alternative: on April 23, 2000 in Las Ventas (Madrid), with David Luguillano as godfather and Finito de Córdoba as witness. The fighting-bull ranch was Gabriel Rojas but the bull of his alternative was an overcoat by José Vázquez.

Manager: his last year as a killer was directed by Manuel Martínez Erice.

Manuel Jesús Cid Salas began his career in Seville but soon moved to Madrid to seek his fortune. His early years were hard, with scarce contracts and forging with the "hard" livestock. In Las Ventas he has left several historical works spoiled by the sword, the eternal Achilles heel of ‘the left-handed gold’, as some nicknamed him.

The 2005 season was the winner of Seville, with two Prince Doors; and from Madrid, with a Main Gate (‘Puerta Grande’) on June 3 after cutting both ears of a Victorino bull. In 2006 he reopened the Puerta Grande of Las Ventas, on May 22 with a bulls form Alcurrucén, and in September another Prince Door alone in La Maestranza bullring with six bulls.

He reopened it in 2007 and cut four ears in Bilbao, in a historic enclosure with Victorino's qualifying for himself as the most important performance of his career.

In 2010 he cut an ear in Las Ventas to a bull from Juan Pedro Domecq. Then he left on shoulders in Barcelona, ​​Dax, Salamanca, Logroño or Zaragoza. In 2011 he cut two ears in Seville and another in Madrid.

The 2018 season ends with a total of 18 bullfights and 34 trophies. In 2019 he says goodbye to the bullrings with 34 bullfights in which he cuts 43 ears and a tail. The trophies achieved in Bilbao, Seville and Zaragoza stand out, where he cut both ears to the bull of his farewell in Spain, from García Jiménez, and leaves on shoulders La Misericordia bullring.