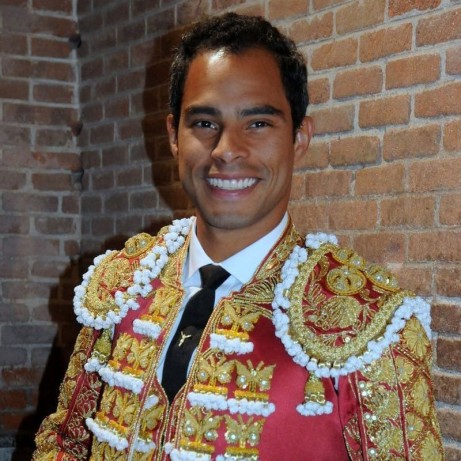 Bullfight tickets to see Luis Bolivar in his bullfights! Buy your tickets now with Servitoro for bullfights happening this year with bull fighter Alberto Aguilar.

Alternativa: (Is a ceremony in which a bullfighter authorizes a novice to take his place among the doctorate bullfighters). Valencia, on July 24, 2004

Confirmation:  (It's when the bullfighter confirms his "alternativa" or doctorate). Madrid, on May 25, 2005.

Luís Bolivar Perez is managing to raise little by little positions in the killers' army register. It gave his first steps like bullfighter in the bullfighting school of his natal city. Later it travelled to Spain to join the school of bullfighting of Madrid, where it remained up to his début with horses, happened in a night cattle celebrated in this square, in which without cutting ears it caused a magnificent impression.

He was proclaimed a winning herdsman of San Isidro's fair of 2003, on having cut an ear in each of his two actions in the credit. It took the alternative on the following year in Julio's fair of Valencia. " The Juli " undressed him killer, officiating as witness César Jiménez. The bull of the alternative, "Christmas", of Montalvo's ranching, hurt the neophyte of extreme gravity on having begun to kill, circumstance that forced him to give for the season finished.

On the following year it confirmed the alternative with Atanasio's Fernandez bulls in San Isidro's fair. Dávila Miura was the godfather and Sebastián Castella, the witness. In 2009 a mayo 2 cut two ears in The Sales - to Carmen Segovia's bull and other one in San Isidro's fair to a copy of The Ravines, which hurt it of less serious forecast - and one in Seville. In 2011 it saw to get down the number of contracts of the previous season, but it kept his credit intact of well professionally.

Last year acted one evening in The Sales, with Cuadri's bulls, and cut an ear in Bilbao to Victorino's bull. It completed an important American season, with victories in Cali, Bogota or Manizales.