The wanted return of Alejandro Talavante

On October 14, 2018, the last bullfight of the Pilar Fair of Zaragoza was celebrated. Juan José Padilla, José María Manzanares and Alejandro Talavante faced bulls from Núñez del Cuvillo on a very special afternoon as it was the farewell of the Ciclón de Jerez, as is known Padilla. However, the surprise jumped at the end of the show. . A brief tweet from Talavante press account announced his withdrawal "for an indefinite period”. 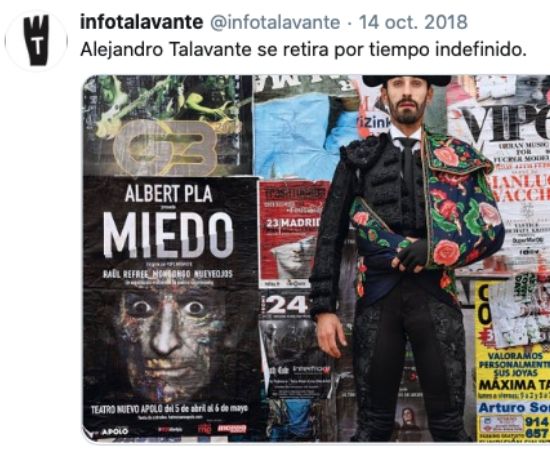 Then the alarms went off. What happened to Talavante? Is he injured? Does he not want to bullfight anymore? Has the season surpassed him? One of the matadors who more illusions and devotions had awakened in the last campaigns, suddenly, he was leaving. And he did it just five months after opening the Main Gate (Puerta Grande) of Las Ventas, touching the sky of Alcalá Street for the fifth time in his career, an achievement he had already reached in his confirmation of 2007, in 2011, in the Charity of 2012 and in 2013.

After the apotheosis of the exit on shoulders of May 2018 (with López Simón), Alejandro Talavante became the axis of the Autumn Fair, the first of the famous and new draw. Two afternoons of the six that made up the season ticket of October loaded the bullfighter with the weight of the fair. But things did not go well. 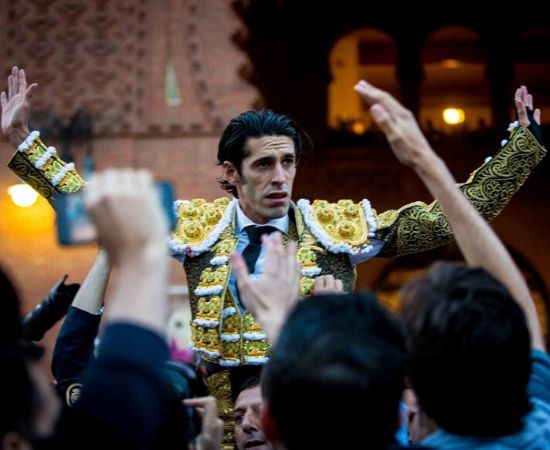 After the break up with his agent, Toño Matilla, in the month of June, the season had become complicated for the bullfighter and he finally gave up. Then many accusations from one side and another began: that the bullfighter wanted to charge more than agreed, that the agent did not defend his interests, that he had boycotted him in subsequent fairs and the situation was already unsustainable for the matador...The point is that Talavante left and the fans were a little more orphaned.

The rumors have accompanied his more than expected return almost from the moment he said goodbye. A dance of possible agents and places for his reappearance has been the constant of the last months. In January the doubts were cleared: José Miguel Arroyo ‘Joselito’ and Joaquín Ramos would manage his career and the 11th of April, at the Arles Easter Fair, would witness his return. 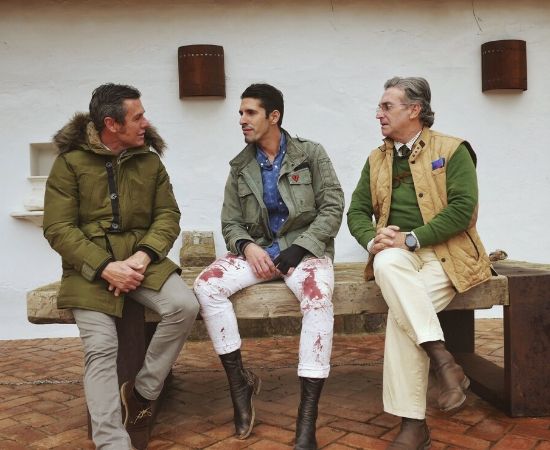 Alejandro Talavante with his agents Joselito (left side) and Joaquín Ramos (right side). Photograph by Talavante Press.

But when in Spain? Again the rumors, this time talking about a short and very selected season, with few occasions to enjoy his left hand. But it seems that finally the return will be stunning, because just one day later, on Sunday Resurrection, he will be present in the great bullfight of Seville, next to Morante de la Puebla and Andrés Roca Rey with bulls from Garcigrande - Domingo Hernández.

Two more dates at the April Fair complete his appearance in Seville: on the 27th next to El Juli and Roca Rey with bulls from Victoriano del Río - Toros de Cortés, and on the 30th next to Miguel Ángel Perera and Pablo Aguado with bulls from Núñez del Cuvillo.

In the absence of official confirmation and according to the information published in the newspaper El Mundo, it seems that he has negotiated three afternoons in San Isidro, which would make him one of the props of the first fair in the world.

So, fortunately, we still have ‘Tala’ for a while.