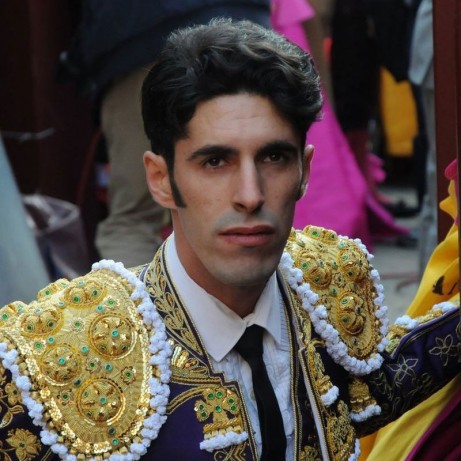 Alejandro Talavante was born in 1987, grew on the bullfighting hand of his maternal grandfather (Emilio Rodriguez), which led to the bullring since childhood. Actually is one of the strongest candidates to take over of the best bullfighters.

Debuted with picks: in the bullring of Samadet (France) on February 1st, 2004.

Debuted in Las Ventas: on April 8th, 2007 after cutting 2 ears and getting the "Puerta Grande" of Las Ventas.

Alejandro Talavante became a fan of the bullfight thanks to his maternal grandfather, Emilio Rodriguez, who took him to the bullring from the time he was a child. The most significant of several important afternoon for Talavante was with the bullfighter, José Tomás, presented one of the ears himself had been awarded. Talavante was so seduced by this moment that he made up his mind to become a professional bullfighter.
At the age of eleven years, Talavante enrolled in the Badajoz bullfighting school. On May 15th, 2000, in his mother’s hometown, Pueblo de Sancho Pérez, he killed his first calf marked with the Cayetano Muñoz brand.
In spite of his short career, Alejandro Talavante has become with his unwavering courage and bold and daring style, one of the strongest contenders of the early 21st century to replace the leading matadors of the day.

In 2021 he returns to the bullrings in Arles after announcing his retirement from bullfighting at the end of the 2018 season.

In 2022 he returns to bullfighting in Spain on May 13, 2022 at the Las Ventas bullring to great expectation.