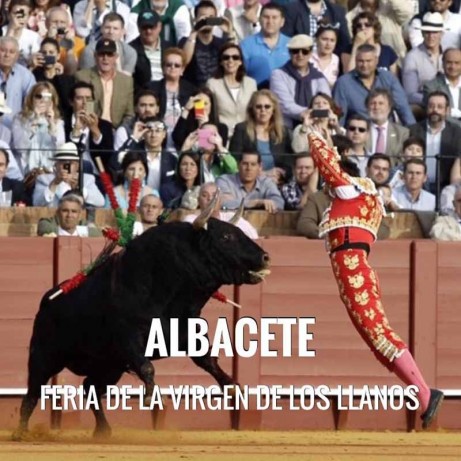 Bullfight tickets Albacete 2023. During the festivitivities can see one of the acts; floral offering to its patron saint, and sawdust carpet that decorates access to the Chapel of the Virgin. Order your advance tickets Albacete.

11 other products in the same category:

Declared of International Tourist Interest in 2008, is celebrated for 10 days in September in honor of his patron saint, the Virgen de los Llanos. The big fair known as the Fair Albacete, is linked to the fairgrounds since the eighteenth century, the opening parade, music and food on the streets of Albacete moved there to the Virgen de los Llanos patron of the city and next to the battle of the flowers is just the beginning of the "Fair".
The festival lasts 10 days in which there are an infinite number of activities and entertainment for all ages and tastes such as music, bulls, theater and tents open at all hours.
During those ten days Albacete practically live at the fair popularly known as "sartén a los redondeles"
Albacete Fair twice recognized as the best festival of Spain 1st Time in 2009 and the last in 2013.

Knowledge of bulls is the key to good amateur, why Servitoro explains step by step the art of bullfighting, that you learn to see and enjoy the ceremony of the Lidia del Toro bravo. Become with us a first amateur in 15 minutes!

How to get tickets to Albacete bullring?

Servitoro delivery service offers the User the opportunity to acquire the tickets in a safe and easy manner from his/her home address, avoiding long queues before ticket offices. Sending of PDF tickets. To gain access to the bullring you must print the PDF FILE.