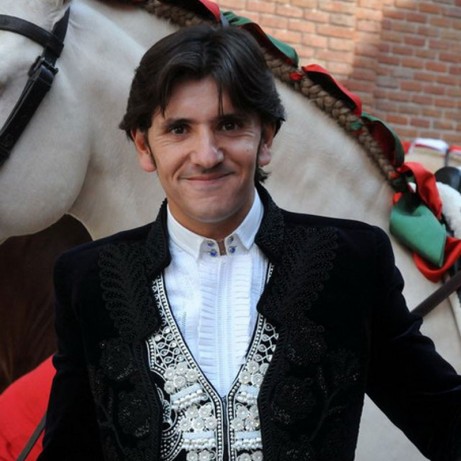 Debut Sales: in Madrid on June 3rd, 2000. in a poster with Luis and Antonio Domecq, and Martin Gonzalez Porras with bulls Fermin Bohorquez.

Son of one of the best trainers in recent times and outstanding horse of fighting seer, he moved with only 4 months old to the estate of the famous Spanish bullfighters Angel and Rafael Peralta, where he remained throughout his childhood surrounded by the world of horse and bull. At 5 years old he is riding his first horse and only 6 years rejonea his first heifer, mounted on 'Tul horse block from his father.

This rejoneador sees his dream of fighting in Seville on May 7, 2000, sharing the bill with rejoneadores Luis Valdenebro, Javier Buendia, Luis Domecq, Antonio Domecq and Pablo Hermoso de Mendoza. Cut one ear much weight.

On March 23th, 2014 Fair cupcake. cutting two ears wins the fifth bull, horse Nazari above is allowed to come closer to the bulls and company Morante was an afternoon show and bustle of the viewing public.

Winner of the award the best rejoneador in San Isidro Fair 2017 of Madrid.